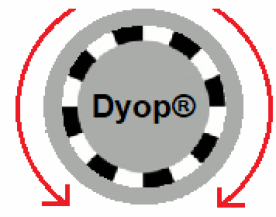 A Dyop® is a spinning segmented circular visual target whose uniform motion, viewing distance, diameter, and color/contrast creates a strobic visual stimulus.  That strobic Dyop stimulus​​​​provides a precise method for measuring visual acuity when the test is viewed on a computer monitor, or refractions in a vision examination lane.  The smallest Dyop angular diameter arc width, whose gaps and segments can be detected as moving, creates an acuity and/or refraction endpoint.  When the moving gaps and segments of a Dyop get too small, their strobic stimulus is too small for their pixel effect to be detected by the photoreceptors of the eye.

A Dyop® is a spinning segmented circular visual target whose uniform motion, viewing distance, diameter, and color/contrast creates a strobic visual stimulus.  That strobic Dyop stimulus​​​​provides a precise method for measuring visual acuity when the test is viewed on a computer monitor, or refractions in a vision examination lane.  The smallest Dyop angular diameter arc width, whose gaps and segments can be detected as moving, creates an acuity and/or refraction endpoint.  When the moving gaps and segments of a Dyop get too small, their strobic stimulus is too small for their pixel effect to be detected by the photoreceptors of the eye.

Using a Dyop test to measure acuity is potentially faster, minimizes memorization, is more accurate, and is more consistent than classic (Snellen/Sloan/Landolt) letter-based tests. That precise Dyop response can be used to determine the acuity/refraction endpoint regardless of an individual’s age, language, or culture, and does not require literacy, let alone the ability to read English.

Much like the steam engine metaphor used to describes your heart as pump pushing blood through the body, or the metaphor of a computer describing how we think, the functioning of the eye is similar to the metaphor of an electronic digital camera or display.  Rather than lines or shapes, what you really see are pixels of light with the photoreceptors in the back of your eye functioning much as the pixelized receptors in an electronic camera.  The photoreceptors send that pixelized image to your brain, and giving you your sense of vision.

Vision science has not kept up with the precision and demands of 21st century visual needs.  Acuity (visual clarity) is now primarily measured by the comfort and ability to read text, especially text on an electronic display.  Twenty-first century electronic images use rapidly scanning lines of pixels which change color and intensity to create the images we see. The photoreceptors of the eye function much like those pixels. Your brain uses the photoreceptor response to create vision and bring that image into focus.

Centuries ago acuity was measured as Resolution Acuity and the ability to see the separation of two distant points or perhaps two stars.  In 1862 acuity was re-defined as Recognition Acuity and the ability to identify European-style letters when reading became a dominant social skill.  Although much of what we see is NOT in black and white, European vision science used the convenience of black letters on a white background as the benchmark.  However only a small portion of the earth’s population could read European letters and letter-based testing was, and still is, frequently inconsistent and imprecise 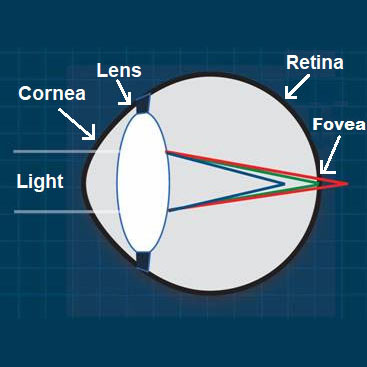 Parts of the Eye 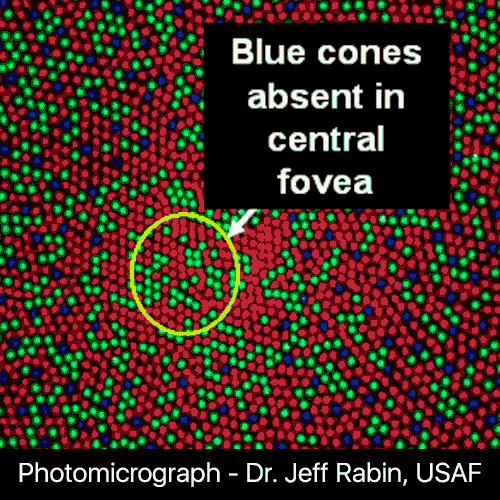 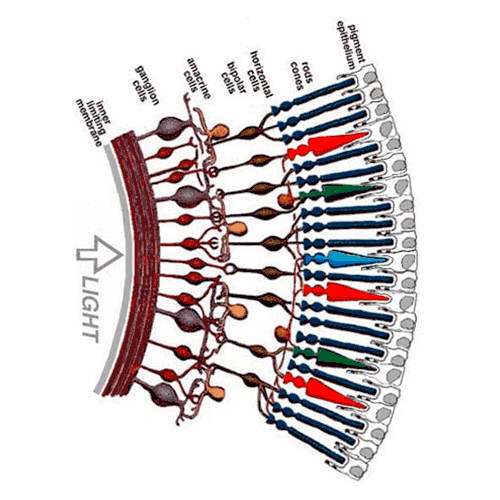 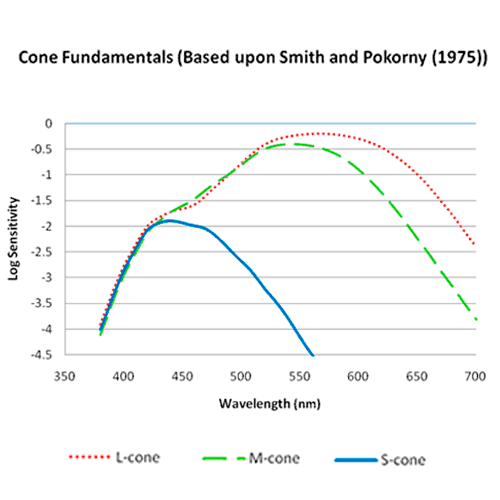 The neural ganglia of the retina function as a biological circuit board to determine that optic nerve fiber stimulus.  The cone photoreceptors in the fovea of the retina are (primarily) sensitive to blue (S), green (M), and red (L) wavelengths of light.  As light travels through the cornea and lens it is bent (refracted) so that the blue, green, and red colors are focused at different depths in relationship to the retina.  That focal depth disparity for those colors creates a “chromatic triangulation” so that blue is focused in front of the retina, green is focused on the retina, and red is focused behind the retina of images.  That “chromatic triangulation” controls the shape of the biological lens to regulate acuity, and increase the eye’s sensitivity for detecting motion.

Also inherent in the dynamics of vision are the saccades which function much as the scanning lines on a computer monitor or TV.  The saccades provide the photoreceptors with a vibratory motion which allows them to be refreshed.  That constant refresh of the photoreceptors by the saccades not only allows for images to be dynamic, but explains the optimum as 0.33 arc minute squared per second refresh rate of the spinning Dyops functioning as the visual equivalent to an auditory tuning fork.  That Dyop refresh rate also explains why static optotypes tend to induce a preference for higher minus spherical power (spherical overminus) due to the depletion of the photoreceptor response from static image fixation.  That tuning fork effect of a Dyop is Resonance Acuity which results in a Dyop having greater precision, less variance, greater measurement efficiency, and a response based on visual physiology as. 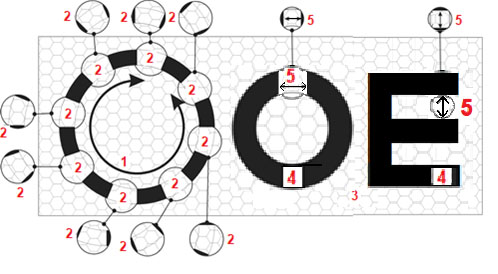 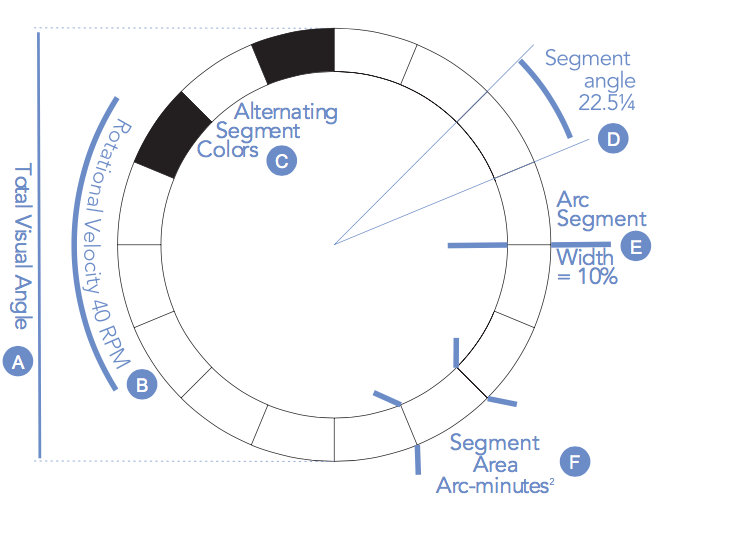 Figure on the left illustrates the fundamental geometry of the Dyop dynamic optotype.

(A)  the total circular diameter or visual angle
(B)  speed of rotation
(C)  contrasting colors, in this example black and white
(D)  segment angle
(E)  segment arc width, and
(F)  area of each segment in arc-minutes squared 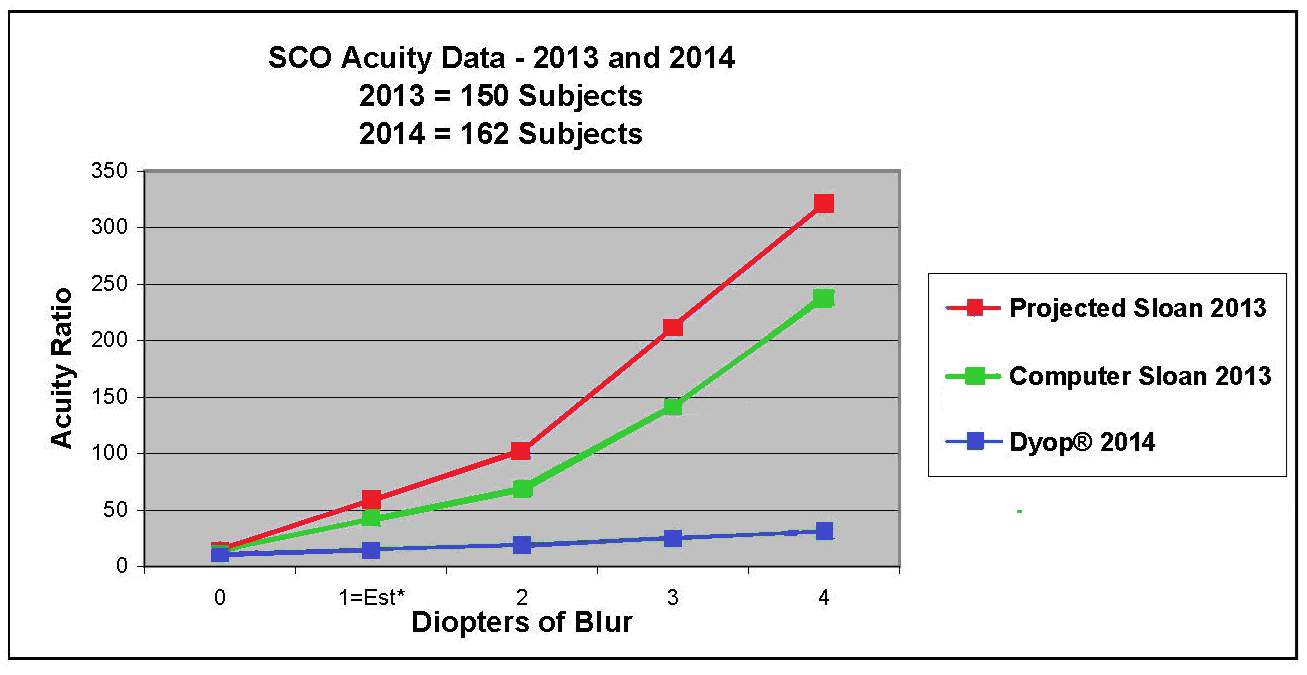 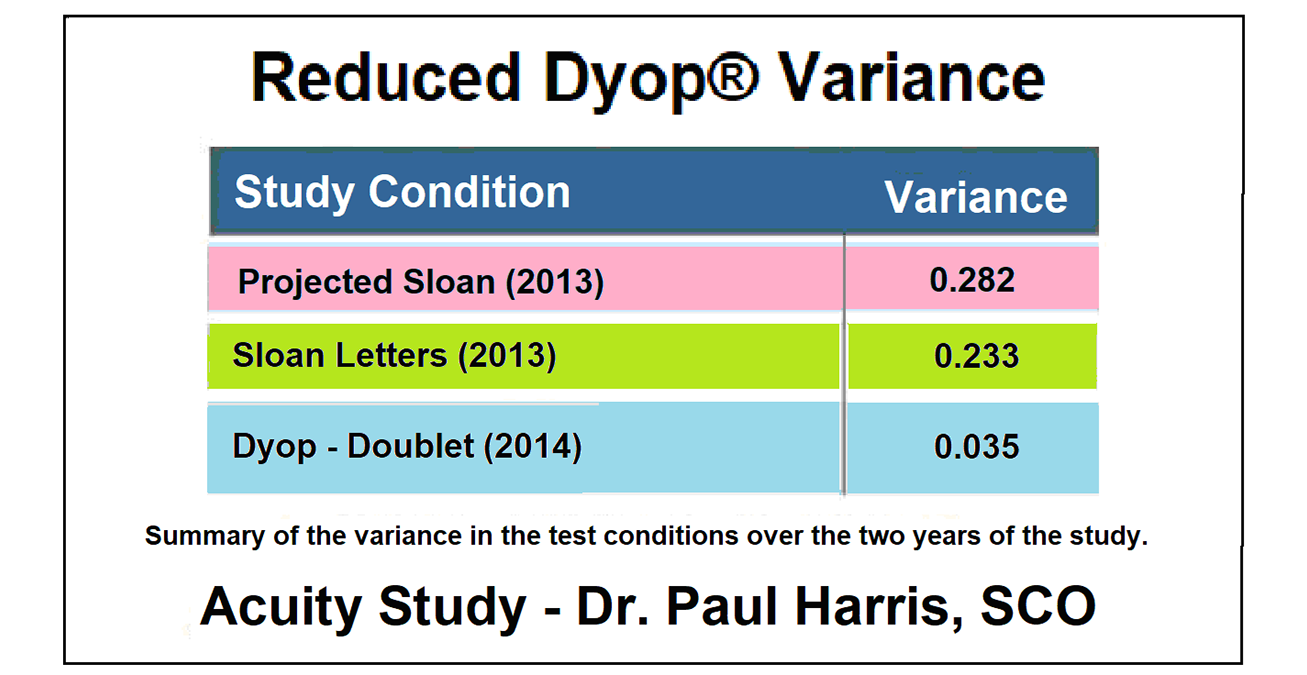 As a vision test based upon a physiological response, rather than the recognition of European-type letters, a Dyop test provides a more precise, consistent, accurate, and efficient method for measuring visual acuity and refractions.  It also allows the Dyop test be used for people with limited literacy and vision for children.

In the typical Dyop test, a patient is presented with 2 Dyops, side by side, one spinning and one static and is asked to determine the direction and/or location of the spinning Dyop.  As the angular width of the Dyop diameter and the size of the gap/segments get sufficiently smaller, the strobic stimulus is no longer sufficiently large enough for the spinning of the gap/segments to be detected.  Unlike static images, which get increasingly blurry as they get smaller, the spinning of the Dyop seems to disappear when the sub-acuity threshold is reached.

As a result of a Dyop having an the optimum stimulus area of 0.54 arc minutes squared, there is also an optimum for determining refractions as to the minimum sphere, cylinder, and axis angular Dyop arc width.

The pixelized processing by the photoreceptors in our eyes interprets what we see as a contiguous image, similar to the pixelized stimulus of a TV, computer display, or digital camera.  Only when we get close enough to the image do we become aware of those individual pixels.

Those visual pixels and their refresh rate are similar to the Dyop® moving gap/segment stimulus, which functions as the equivalent to a visual tuning fork using Resonance Acuity.  When the Dyop® gap/segment stimulus area gets sufficiently smaller, or is viewed at a sufficiently farther distance, our eyes no longer detect the motion of the gap/segments, and merge the perception of the gaps into a sub-acuity continuous image. The perception of the smallest strobic gap/segment Dyop® stimulus detected as moving creates the acuity endpoint detection.

Chat to us via Whatsapp
Close Menu